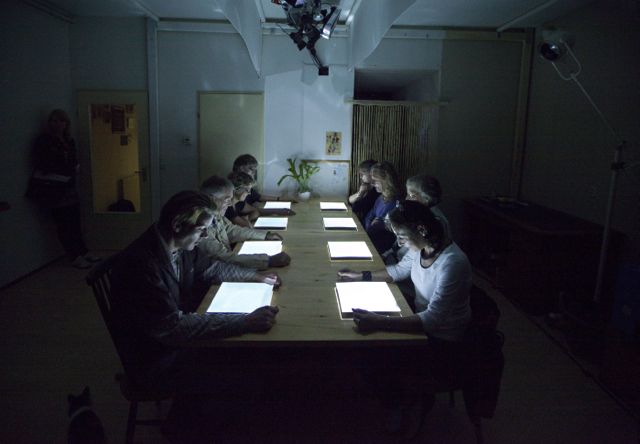 Interactive artist/computer wizard / multi-instrumentalist Jan Klug and I were invited to collaborate on a project for Pavlov E-labs, a nomadic lab with a focus on Art/Science collaborations. Different teams of artists and scientists brainstorm and work together. Jan and I worked with historian Mineke Bosch and genetic biologist Jean-Christophe Billeter (researching pheromonal regulation of social and sexual behavior in Drosophila melanogaster aka the fruitfly) on a project themed ‘lines of belonging’.
Based on meetings with Bosch and Billeter, we built an interactive environment in a living room. Our audience was seated around a dinner table on which we projected stories, infographics, and films, interlaced with soundscapes based on the rhytm of the wingflaps of Drosophila melanogaster. Visitors recited the short scripts we projected on their plates to each other. Scripts featured small stories on family life, including its frictions. We played out dialogues by Bosch and Billeter over old family movies into which we had keyed our visitors. The set was completed with plants circling around, and cats snoring on couches.
Over 260 people have joined us during four evenings; each performances was sold out.
The video fragment below shows some of the set, as well as some interview fragments.